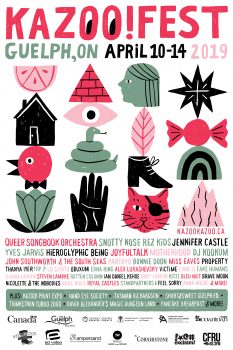 We’re back for our 12th annual festival featuring a genre-defying lineup of independent artists from across Canada. Over five action-packed days in Guelph, Ontario, Kazoo! Fest will feature 40+ musical performances, visual and media art, contemporary dance, the Kazoo! Print Expo, and more.

Kazoo! Fest 2019 will also include a co-presentation with indigenous record label RPM (Revolutions Per Minute) as well as a selection of notable artists from across Canada including: JOYFULTALK, DJ Kookum, Motherhood, John Southworth & The South Seas, Thanya Iyer, Pantayo, TRP.P, Edna King, Bonnie Doon, and many more. See the full lineup here.

A number of well-loved Kazoo! Fest traditions are back this year including the Kazoo! Print Expo featuring comic-makers, zinesters, and printmakers as well as the Guelph edition of Short&Sweet, a hugely popular contemporary dance event. Kazoo! will be working with Ed Video Media Arts Centre to present a lineup of media and visual art events including an independent video game exhibit curated by Toronto’s Hand Eye Society, a performance by media artist Tasman Richardson, work by visual artist Shaheer Zazai, and Trinketron Turbo 2000, a mobile robotic vending machine. And it wouldn’t be Kazoo! Fest unless the weekend was capped off with a Pancake Breakfast show on Sunday morning.

The Kazoo! Crony Pass (festival passes) are on sale now for $75 as well as tickets for select events. The full schedule will be announced in the coming weeks. 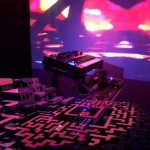 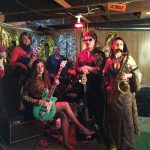 Why Bonnie Doon Rules by Josée CaronKazoo Fest! 2019, Why This Rules