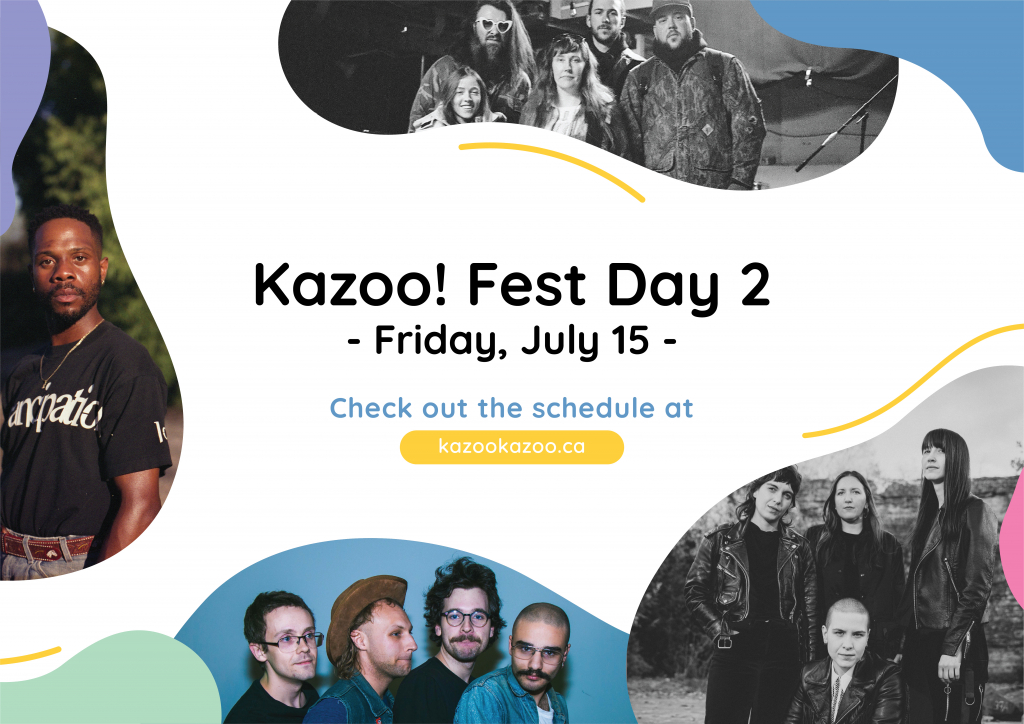 Kazoo! Night 2 opens at Royal City Mission with a hero of ours, André Ethier. With incredible, thoughtful and gentle songs, we can’t think of a better way to set the tone for Friday night. Next is amiskwaciy (Edmonton)-based Matthew Cardinal whose set will be a highlight. Matthew, also a member of nêhiyawak, makes some of the most beautiful ambient music we have ever heard. Jasmyn (who you may know from Weaves) follows with her engrossing off-kilter pop and rounding out the night is Guelph’s Bonnie Trash. Let me say that again. The sonic and visually immersive experience that is Bonnie Trash. In a church. Imagine. We can’t.

You have some really hard choices to make tonight as Guelph’s best new band, SHEBAD, takes the stage at Onyx at 8:30pm with their undefinable blend of R&B, Soul, Jazz, etc. It’s just the best and, if you’ve seen them, you know this. Status/Non Status (FKA WHOOP-Szo) are up next and to call them a Kazoo! favourite is an understatement. We are blessed that they are bringing their sludgey, introspective and powerful sounds and message to our fine city. Jane Inc., the new (and incredible) electro disco post-punk project from Carlyn Bezic (Ice Cream, US Girls, and Darlene Shrugg) is set to hit the stage after that and is sure to win new fans over with their Guelph debut performance. Closing the night is Houston-based rapper Fat Tony. Fat Tony is one of our favourite rappers, period. This is a DO NOT MISS set. Add the fact that gin ebony will be DJing some of the best electronic music around before and between sets (and after Fat Tony kills it), it’ll be hard to peel yourself away from Onyx tonight.

Also, if you’re wondering why Onyx and Royal City Mission looked so good last night, that’s because Evan Gordon was doing live visuals over at Onyx while Fezz Stenton was doing the same over at Royal City Mission. And, yes, they’ll be making magic at those venues again tonight and on Saturday night.

MEANWHILE (yes, there is more) those who like real nice times might want to pop by the Jazz where the raw, captivating art-rock band Bodice takes the stage followed by Guelph math noise captains Tarxanax. Toronto’s Westelaken then closes the night. We love this band and have wanted to bring them to Guelph for years. Mixing country, alternative, punk, post-rock, +++, this might be “the” band of Kazoo! 2022.

Check out the full schedule for Friday at Kazoo! Fest 2022 and get your advance tickets here.