Bonnie Doon evokes many things. Although the band’s namesake is a neighbourhood in Edmonton, these words conjure everything from fairytales and glorious rolling hills to pizza sharks and dueling basses. That’s because Bonnie Doon aren’t just “one” thing – Bonnie Doon are many things.

I first became aware of Bonnie Doon through making music videos with Lesley Marshall. She is a founding member of the band and an Ottawa-based director. As a director, I would call Lesley a DIY maverick. Of her musicianship, I would say the same thing. Knowing that there was much to learn, I called her up to get the scoop.

I learned that the band is currently a five-piece, with newest member Aymara on saxophone, Mad Dawg on guitar, Keltie “Coach” on drums, Lesley on bass, and Gina Vinelli on second base. The fact that they have two basses is my top favourite thing about Bonnie Doon. The first time I saw that in their video for “Now or Neverish”, I thought it was so badass. Lesley explained that each bass has its own distinct role. Lesley’s is more weird and experimental, while Gina’s is more grounding and deep. To me the two basses represent the essence of why Bonnie Doon rules, which can be framed as a question we all must ask ourselves from time to time: Why not?

In a world where there’s a lack of visible femme identities, a group like Bonnie Doon is very important. They write collaboratively and they prioritize experimentation. They reject formal practices in favour of pushing the boundaries of what a band can be. The result is songs with captivating titles such as “Pizza Shark” and “Panty Twister”, and unconventional arrangements that keep you on the edge of your seat. This is another major reason why Bonnie Doon rules: the way to make discoveries and move forward has always been through breaking down barriers (both material and mental) and by working together. I just love the spirit and the attitude they bring to this important work.

Bonnie Doon’s live performance aspect is a whole other thing. They take every opportunity to perform very seriously. Each performance has its own “theme”, which is different every time. So Kazoo! Fest goers can look forward to that. Lesley told me one recent theme was “Librarian”. Another past theme has been “Ninja turtles”. It’s usually connected with the space the band is playing in, but we really won’t know what’s in store until the night-of.

In the meantime, anyone who is curious can check out the band’s videos as I would say that the visuals are an important complement to the audio experience. In short, Bonnie Doon is awesome, but don’t take my word for it: see them at Kazoo 2019!

Josée Caron is a core-member of Partner. Caron was also a member of Yellowteeth and The Mouthbreathers. 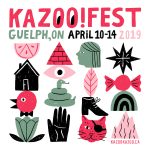