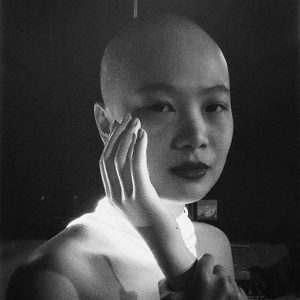 Xuan Ye, otherwise known as APA (A Pure Apparatus), is a prolific artist, a multi-instrumentalist, and computer coder, whose wanderlust creativity has led her to live many lives before she arrived in Toronto four years ago. Despite her soft spoken nature, she is an explosive force in performance, drawing upon her eclectic background to respond improvisationally.

Xuan was born in China, where she was trained in classical piano from age six. As her family was likely the sole owners of a piano in her small community, Xuan travelled long distances to Quanzhou for her weekly lessons before ultimately leaving her home at eleven years of age to pursue her musical education. Xuan majored in piano performance at a boarding school in Gulangyu, an island otherwise known as Piano Island, famous for its architecture, winding carless streets, but moreover, the plentitude of pianos.

After the completion of her studies on Piano Island, Xuan to a brief break from playing to focus on sciences, though soon formed an all-girl punk band, while concurrently performing R&B covers on televised and radio talent shows.  Though successful on the talent show circuit, her parents forbid her from continuing in hopes that their daughter would secure a financially viable vocation. Xuan continued a clandestine solo music career while studying e-commerce and financial engineering in Shanghai. Posting online and performing at night made her certifiably internet famous on Douban, the hugely influential social network, like a mashup of myspace, facebook, and imbd, in China. Influenced at that time by bossanova and folk music, Xuan performed with her guitar and harmonica. Upon graduation, Xuan once again left the familiarity of her home, quit her job to become a bar singer in a mountainous community in Lijiang, near Tibet. The gig obliged Xuan to perform certain standards, and some of her own choosing, including numerous Nirvana covers. Frustrated with the fetishization of the sweet voiced singer inherent to the genre, Xuan then moved to New York City to study corporate communications and media studies at NYU.

Focusing on sound and semiotics of performance, it is here that Xuan became familiar with the works of John Cage and Alvin Lucier. Xuan made demos privately, deleted her Douban profile and transformed into APA. Xuan moved to Toronto and began performing, guided by a self-defined rule to never repeat the same setup. ‘A Pure Apparatus’ is emblematic of this ethos of improvisation.