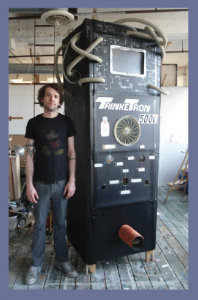 Ryan Cassidy rules because he has no limits.

His imagination is taller than the highest mountain and wider than the biggest ocean. It’s a conglomeration of all these things that keeps the little boy alive and well inside a grown up body. He’s never wrong but being right all the time isn’t satisfying to him either. He has to question and try out all the whys and what ifs before he can truly commit. He is exhausting to me but he never gives up. He can see a million miles further than me – and i wear glasses! He has a big head… to store all his memory banks of bits and pieces that no one saw or remembered except for Ryan. He must be an elephant…he never forgot anything. My first recollection of his artistic talent was a mural he drew behind the couch on the wall of a rented apartment. I probably should have bought him some sketch paper instead of having to repaint the living room before we moved from there.

His kindergarten teacher called me at work one day to tell me that Ryan had painted the walls and floor of the coat room and kids lunch cubbies at the back of the class. I asked her where she was when he did this and she told me she was with another student. She should have known Ryan was a full time job himself. It was her fault for not watching him, not my fault for giving birth to him.

Ryan’s teenage years were challenging to say the least. It was then that i realized that along with his artistic ability he was also a great story teller. He had the best excuses for being out all night that included a trip to Toronto to see Marilyn Manson at 14 years old. After hours of worry and some police intervention, Ryan sheepishly showed up and explained that he figured it was better to ask for my forgiveness for going than to ask permission to go in the first place. Made perfect sense to me. That’s just how he rolled back then. Now that he is a young man, I still try to supervise his activities and keep him in line. Its a little more difficult since he lives in the big city now. Recently, he spent some time at my house working on his TrinkeTron trinkets. He didn’t allow me to help him, but I did supervise and pour his wine. He rules, but I rock. We are a great team. 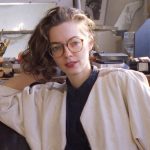