Name aside, his anger might not be clear through the daily rhythm of an associate or a passerby. Spotted sipping fine beers from afar, this bespectacled, cardiganed man looks like he could be somebody’s (maybe even my own) quiet Dutch uncle who paints. Appearing around town on band-mate Gregory Pepper’s handmade tees, he smiles forth with a slacker porch party vibe. Having lived a few years above this furious drummer/producer, I’ve heard some things. I’m not talking about some usual tales of rageful youth; that he used to kill at high-school football; that he would smash drywall just a touch more than tall-cans or his siblings (who didn’t? I did). Unusually, I heard this guy take a lifetime of common fury out on his kit day after day after day. He vexed tough paradiddles into palindromes of naming, maturing power. One time, after a house-wide Norwalk plague, Angry Bones (as he is also known in the indie realms of small-town gore) was found drum-battling the Super-Bug on his practice pad, between sips of Day-Glo Gatorade. My dehydrated, rhythmically-starved brain was a rocking nod of pukey incomprehension. ‘Who the fuck even owns a practice pad?’ I nodded. The Bug was nothing against a pretty Purdie Shuffle. Forget about the sickest fills of Buddy Rich…

Just think about all the things that didn’t pass through the floor-boards (let’ s overlook the Terrance McKenna-based rituals and the late-night Hellman’s mayo binges). All that time, and since, Madadam’s crafted perfectly pocketed beats in his phones. Agitated Masters like Noah 23, Gregory Pepper, & Skweeezy C have all gained from his democratic mix of indignation. And so has he. His track My Bad barely contains his badassedness. It’s accompanying video (apparently soon to be accompanied by a new video) shows a softer, sweeter side of Mad’. Getting meta-ironic with Rage Queen Alanis Morisette’s jaggedly un-ironic video for ‘Ironic’, ‘My Bad’, the video, features Madadam as both driver and passenger(s) of a seemingly fame-fated vehicle. The Dutch uncle, the average sibling smasher, the slacker porch-party bud, the masterful drummer/producer, they’re all here – clashing under control, a polyphony of paradiddles, a studied palindrome of successful anger-management. When Mad’ exits Irony’s suburban convertible into a standard farmer’s field, I like to think he is stepping into a future identity. I secretly imagine him, in this scene, as equal parts Terrance McKenna, Dutch uncle, and Super Bug defeater– co-wondering why Margaret Atwood lifted the Ur-Mad’ name without rocking a nod. I’m not saying I have an accurate measure of true Mad’ness. I’m just saying I’ve been close to the local source.

Madadam is angry, but it’s music, and you’d gain from hearing his painterly rage.

Why Ryan Cassidy Rules by Terri, Ryan’s Mom (2016)Why This Rules 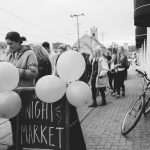