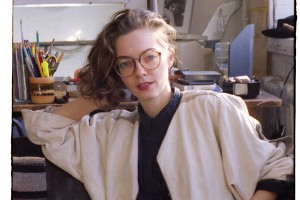 I met Iris during a pivotal time, when I was graduating high school, not necessarily going to University or anywhere specific, still living in my childhood home. Iris moved to Toronto to study film at Ryerson; I pretended moved to Toronto on an extended stay during “Canadian Music Week” sleeping in Owen Pallet’s bedroom while he was away on tour. I played music and worked at my dad’s store, had a disposable income, and no longer had anything regular requiring I spend any specific time in Guelph. Iris was already the coolest person my age: she came from the tiniest town of “Gasline” named for the gas-line that runs through the fields and powers her father’s incredible glass-blowing studio. She had super dark rimmed glasses, and she was the best dressed person I had ever met. She skipped residence altogether and, instead, saved money living in the big city by being the roommate of an older lady she had found through an ad.

Iris framed everything in neat weird art projects but, like me, school wasn’t really the best place to keep her interest. She stuck with it for a bit but all the while we were buying matching grey shoes and leather jackets and wandering the streets of Toronto smoking cigars. We made it onto the front page of the Globe and Mail as “fans cheering on a band”. Neither of us REALLY thought we were professional at anything but at the same time she was editing music videos for friends, I was playing music festivals, and in retrospect we were two of the most honestly active young artists around. It meant so much to me having this sudden best friend, a peer in all things aspirations and adventures.

The weekend after Iris set on her path to make her film “Brother Frank”, we were sitting in a car together in a field somewhere in the Niagara Region. Iris had been doing bits of video editing but that day in that field she told me stories of her new inspiration, her first would-be-film. I knew Iris would be successful – Iris was the type of person who bought fancy cheese to cross paths with her crush, and who got her driver’s license so she could drive my band to New York City. I had never seen Iris fail, I loved and admired her resiliency, I was in awe of how unconventional her route often was and how it always reached its destination.

Iris and I never fully lost touch but our best friendship did get shuffled to make room for new obligations: a relationship, children, and much-less-Toronto travel for me and Iris got rid of her phone sometimes, the internet at other times, sometimes she even fled the country. I was aware that ‘Brother Frank’ was being filmed, but it would be years before I ran into Iris one afternoon at her temporary home on Toronto Island and found out she was nearing completion. This project ran through so many years of Iris’ life and we have both done so many crazy things in the time between. During Kazoo! Fest this year, a lucky audience will be treated to the first sneak peek of ‘Brother Frank’ – and it’s going to be happening on my Golden Bus. More than ten years since that day in that field, Iris and I will be sitting in my golden bus – a culmination of years of my efforts for one of my craziest projects – celebrating a project she’s been working on her entire adult life. In adulthood we will return to best-friendship, as the weirdo artists we were destined to become.

Jenny Mitchell is local musician best known for her work with the Barmitzvah Brothers, Jenny Omnichord and Bird City. She also runs Label Fantastic, and is involved in Kazoo! Fest 2016 as the mastermind behind The Golden Bus and a member of the 2016 Look Hear project, “Know Your Neighbours“. 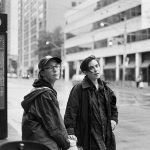