Why Hieroglyphic Being Rules By Graeme Langdon 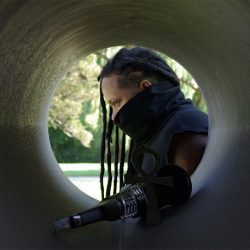 He calls it “cosmic bebop.” Or “rhythmic cubism.” Even “synth expressionism” to acknowledge his inheritance and reanimation of the revolutionary intensities that have energized Afrofuturism and modern black music, from Sun Ra to his early mentors and inspiration, Adonis, Ron Hardy, and Steve Poindexter. But Hieroglyphic Being’s Jamal Moss is also a little like flypaper when it comes to buzzwords and critics’ descriptors, with albums and EPs filed under EBM, jack jazz, rhythmic noise, and dark ambient. If you put an adjective in front of “house”, chances are that Jamal has been there and done that. So it should be no surprise that Moss is also frequently identified as an originator and leading figure in the para-genre, “outsider house.” It is an instructive signifier for anyone new to his music, if superficially limited in its reduction of his relationship to the genre to the form of the exception. For how can someone exist outside a genre he helped create?

Jamal’s 30+ years of musical creation have certainly involved the bucking of trends, left turns, and an exhaustive exploration of new sounds and states of mind. His vast catalogue includes forays into acid and deep house, techno, noise, ambient, free jazz, and more under his own name, as Hieroglyphic Being, and a number of additional aliases and collaborations—not to mention his champion’s role as founder and man in charge at the similarly prolific Mathematics Recordings. There is just So Much Noise 2 Be Heard! But these departures never constitute a withdrawal from the originary principals first articulated in the warehouses and clubs of his hometown in the early-80s. There is no mincing of words when it comes to Jamal’s reverence and respect for the artists that came before him.

But the mark of the “outsider” needn’t situate an exceptional work or artist outside of its class, as Slavoj Zizek suggests. In fact, it is more likely that genres derive their structure and coherence from the more experimental, unconventional, and exceptional works in the tradition. Thus, a film like Goodfellas can be the ne plus ultra of gangster movies for Zizek precisely because the film appears to share so little with the genre’s more generic works. So it is that Hieroglyphic Being’s estrangement and otherworldliness situate him at the centre of house music, a shining example of what is very best in the genre because he is an exception.

Moss certainly operates outside of the status quo. In spite of that familiar beat, those evolving melodies, and that cultivation of atmosphere, Jamal’s music constitutes a completely creative and unconventional approach to the cumulative syntax and semantics of house. So while all dance music is about deliverance, this is a music that delivers us elsewhere, and generally by other means. Could his A.R.E. Project with Sarathy Korwar and Shabaka Hutchings be any further from We Are Not the First, which he recorded with folks like Marshall Allen and Shelley Hirsch, let alone “Time to Jack” or “On and On”? Jamal exceeds himself with every new release, so it goes without saying that he is operating in excess of the genre. But is the relationship severed?

House is, after all, a boundary music. A threshold where the logic of blues, jazz, and disco, are reaffirmed and recreated. It is a hybrid form on the cusp of sampled and original music, entwined in expressive knots of varying degrees of tautness. It is a cut-up in which traditions are severed and rebuilt, a cyberpunk mutation of the process by which folk songs survive generations, migration, and displacement.

And if house is a boundary music, could it have come from anywhere other than a city of proficient creation and radical cross-pollination such as Chicago? The hard-knuckle hometown in which Jamal has scraped by, living on the streets and nocturnally in dance clubs in order to keep warm during his teenage years, has also always been a strapping place of encounter and exchange. It is the place where the Potawatomi and other Algonquin tribes stitched together a continent by connecting what we now call the Great Lakes and the Mississippi River, and it is the place where Sun Ra and his Arkestra maintained contact with outer space. It is the city that electrified the blues, confounded jazz, and elicited house from disco. Home to the Chicago Black Renaissance, the AACM and the Art Ensemble of Chicago, Chess Records, Curtis Mayfield, The Staples Singers, Chaka Khan, ONO, Larry Heard, Jesse Saunders, and a staggeringly cool new generation of trailblazers associated with the International Anthem such as Jaimie Branch, Angel Bat Dawid, Ben LaMar Gay, and Makaya McCraven.

Jamal brings rigour and restlessness, reverence and inventiveness to his role as an inheritor and propagator of this legacy. In Kingston, Ontario, we were lucky to host two adventurous hours of Hieroglyphic Being’s sonic madness during our 2018 Tone Deaf Festival last November. Between festival performances in Berlin and Sao Paolo, Jamal popped over to Loyalist Country to slay minds in a Waldorf school gymnasium, if you can believe that! What struck me about our communication before and during the festival was the fantastic balance he strikes between peaceful positivity and fastidious self-direction, with every aspect of his sound and career sagaciously managed. When I think of the time and attention he gave to one little performance at one little festival in our small little market relative to the breadth and scope of his career, his year even, my mind boggles! But what is also clear is that Jamal thinks of his work as having a missionary component, converting unsuspecting crowds to new states of consciousness and bodily expression through music. As Jamal maintains, he has just one goal when he enters the club: “create heaven on earth as best as possible.”

Hieroglyphic Being’s music exists on that threshold between heaven and earth, a boundary precisely because it is boundless. Between earthly repetition, the rhythmic monotony of our workaday lives, and the heavenly transmutation of that rhythm, elevating us to an order of experience beyond reflexivity and uniting us on the dance floor. This is why Hieroglyphic Being rules.

Graeme Langdon is a public librarian and musician in Kingston, Ontario. He was a co-founder of Psychic Handshake Recordings and managed the record label with Kazoo!’s Mike Deane until 2017. He is a guitar player in the Montreal post-punk duo The Pink Noise, a co-organizer of Kingston’s Tone Deaf Festival, the President of CUPE Local 2202, representing library workers in Kingston and Frontenac County, and Treasurer on the governing board at CFRC 101.9. 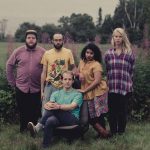 Why Thanya Iyer Rules By Kyle BrendersKazoo Fest! 2019, Why This Rules 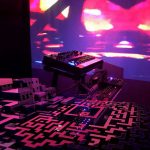