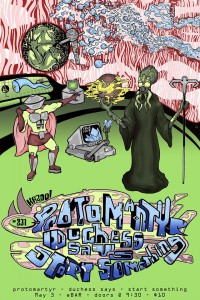 PROTOMARTYR:
Following 2012’s post-punk perfection “No Passion all Technique” and 2014’s masterpiece “Under Color of Official Right”, Protomartyr returned last year with “The Agent Intellect,” cementing themselves as the reigning champions of moody, melodic, and thoughtful rock n roll.

They’ve been praised by everyone (Pitchfork, New York Times, NPR, Washington Post etc etc), they’re loved by many (especially all of us at Kazoo! Fest), and they are playing in Guelph for the first time on May 3rd.

DUCHESS SAYS:
Duchess Says was created in late 2003 by four influent members of the Church of Budgerigars who decided to collaborate together in a common musical project. Their musical influences range from no wave, new wave, punk, to cinema and visual arts. If you pay attention, you could see them perform in the most unusual places such as golf courses, shop windows, vacant building sites etc. Duchess Says has the mandate to decontextualise the rock and to promote simultaneously their Church on the way.