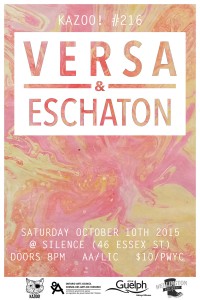 VERSA:
VERSA is an audio/visual collaboration between process-based artist Monika Hauck and musician Alex Ricci. Influenced by contemporary soundscape, instrumental post-rock and 60’s psychedelic, the project combines heavily effected bass guitar compositions with projected visuals created live on stage. The composition of the music serves as a cause for the visuals, and vice versa; the need for movement in the visuals dictates choices made in the arrangement.

VERSA explores the physicality of sound and new ways to view and record it. Low frequencies are rendered visible as sound is passed through a subwoofer into a liquid bath, creating an undulating motion in water, into which coloured ink is dropped. The entire process is captured using analog video and projected as a backdrop to the performance. Both temporal and physical evidence of sound will be captured using the projected visuals and the creation of paper marbled prints. These seismograph-esque artifacts will then be available to the audience as a unique “record” of the performance. VERSA was conceived in Guelph, Ontario, as part of the Look Hear Micro-Grant initiative and debuted at Kazoo! Fest 2015.

ESCHATON:
Eschaton is a soulful noise duet comprised of saxophonist Connor Bennett and trumpeter/DJ/drummer Aaron Hutchinson. Weaving thick textural noise with emotive horn work, Eschaton creates narrative soundscapes that breathe, bend, and distort. They have released two cassettes, “\” and “>” in 2013 out of Hamilton Audio Visual Node (HAVN) and contributed the track “Pasteurise” to the PERDU compilation release “~ Vol. 1 ~”. The pair’s extended improvisations have been featured as part of the New Harbours concert series, Homegrown Hamilton and HAVN, an artistic collective where both are members. 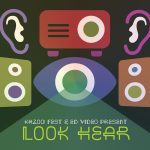