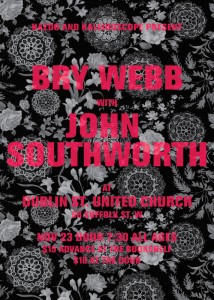 BRY WEBB & THE PROVIDERS
Bry Webb was the singer/guitarist in The Constantines from 1999 to 2010. In 2010, Bry stopped touring with The Cons to focus on his family. He and his wife, contemporary dancer, Katie Ewald, relocated from Montreal to his former home of Guelph, ON. They celebrated the arrival of their son, Asa, in early 2011.

For many years, Bry has been making quieter songs, outside of the bombast of The Constantines. His songs Positive People and Big Smoke were featured in the 2007 feature film, This Beautiful City. In May 2010, he traveled to Haida Gwaii to record a site-specific score for the film project The National Parks Project with Jim Guthrie, Sarah Harmer, and filmmaker Scott Smith. Recently, Bry was invited to appear as guest vocalist on the first song on Feist’s album, Metals, and to perform as the opening act on the Canadian leg of her 2011 tour.

In November 2011, Bry Webb released a collection of nine songs on the independent label, Idee Fixe. The recordings were made in three days with engineer/producer Jeff McMurrich (Jennifer Castle, Sandro Perri, Owen Pallet). Bry, along with lap steel player Rich Burnett, pedal steel player Mike Brooks, and upright bassist Tyler Belluz, recorded the album almost entirely live off the floor, playing together in one large room at 6 Nassau in Toronto. The album is eerie, minimal, and organic. It’s called Provider.

John Southworth is one of Canada’s most distinctive and iconoclastic music artists, respected for forging ahead with his own unique brand of music-making, while garnering high praise for his inimitable contributions. His songs have been covered by great Canadian artists such as Sarah Slean, Martin Tielli (Rheostatics), Mary Margaret O’Hara, and Veda Hille. He has also written songs for artists as diverse as Hawksley Workman, Buck 65, and Jully Black. Along with Juno Award-winning arranger Andrew Downing, he recently co-released Easterween, a surreal cabaret song-cycle, that was hailed as “undoubtedly the most ambitious thing Southworth — or, for that matter, any other Toronto singer/songwriter in recent memory — has done” – (Michael Barclay, The Record). John continues to contribute to and perform regularly with Toronto’s Art of Time Ensemble. He has authored a children’s book in the realm of Edward Gory and Lewis Carroll, with illustrations by New York artist David Ouimet, to be published in spring 2013.