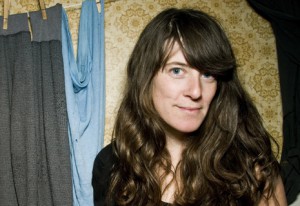 The first thing that comes to mind when tasked with explaining why Julie rules, is “what’s to explain?”. It feels like one of those things that should be considered an accepted universal truth. Pizza is delicious. The third Godfather film is pretty bad. Julie Doiron rules. All true facts.

The thing about Julie that’s so immediately endearing is the total lack of pretense. Julie is honest and earnest. Unabashedly so. It’s all there on the page, or in the music, or however you prefer your metaphors. It’s rare that an artist is so willing to wear their emotions on their sleeve as confidently as Julie. Heck, her emotions are her sleeve. You get a sense for Julie’s life, her love and her family. Like an old friend regaling you with stories of loves past and present, there’s a human characteristic to her music that doesn’t exist everywhere. Julie’s songs are the strongest form of frailty I’ve ever encountered, with a voice and presence like no other. The perfect blend of confidence and hesitance. Hushed and at times sparse, all the while imbued with power and beauty. There’s an obvious and casual strength there, perhaps tied to punk rock roots, perhaps an offshoot of her obvious talent and effortless ability. If you’ve ever had the pleasure of seeing Julie perform live, you’ll know the ease between casually strumming and full on rocking out. Julie’s got it all.

Which brings us to seeing Julie playing live. Something that should be on everyone’s To Do list, right under “make To Do list”. I remember watching her play at last summer’s Bloor-Ossington Folk Festival in Toronto. It was late at night, we were tired, somewhat cold, shifty and a bit restless. Julie hit the stage with a bunch of friends, and the mood changed from ‘end of the night restlessness’ to a desire for the night to never end. Wherever she plays, and whoever she’s playing with, be it solo or with her wide array of friends and collaborators, Julie will prove to you every time why she rules, because there’s no one like her out there. She’s like our very own Neil Young, the queen of Canadian indie rock.

Andrea Stratis runs the excellent Headless Owl Records based out of Whitehorse, Yukon.