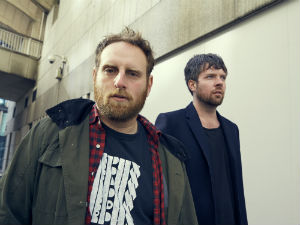 JUNIOR BOYS:
Formed in 1999, Hamilton duo comprised of Jeremy Greenspan and Johnny Dark have been making some of the best electronic music to have ever come out of Canada.

When the Polaris shortlist veterans unleashed their debut, Last Exit, in 2004, jaws were dropped – and many still remain dropped today. Followed by three more stunners — So This Is Goodbye (2006), Begone Dull Care (2008) and It’s All True (2011) – the band continued to develop their distinct sound, winning acclaim all over the world. After five long years, Big Black Coat (City Slang, February 5th) marks the return of Junior Boys. Making their long overdue Guelph debut, Kazoo! Couldn’t be happier to present the Junior Boys.